Often times in rehabilitation, we over simplify or over complicate various topics. This can be done with or without intentions. It can have beneficial or detrimental effects on transferring this information back to our clients or on to other rehabilitation professionals. Take vision in motor learning for instance. It is taken for granted that vision play a primary role in both learning as well as adapting to our environments around us. The ability to process information classical starts with visual based inputs and in support of skill building. Did you know that two different visual systems have been documented in the literature? They are referred to as the dorsal (ambient) stream and the ventral (focal) stream (Ungerleider 1982). They are understood to have different specializations and are used in different ways during daily motor processing.

The ventral stream is used for conscious identification of objects that lie primarily in the center of the visual field. Therefore, as you are reading these words on your smart phone, the primary input is coming from the ventral system. It is responsible for the conscious perception of objects and can be manipulated by alterations in environment lighting such as dimly lit rooms or driving as night.

The dorsal stream is believed to be used for movement control utilizing the whole visual field. Both central and peripheral. The dorsal stream operates unconsciously contributing to the fine motor control movements we perform. 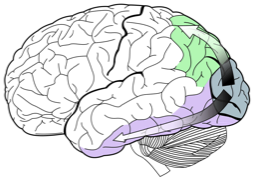 How have we figured this out? One evidence of is from the term “blindsight”. If I may just quote this area specifically from Motor Learning and Performance 5th edition by Schmidt, “Perhaps the most startling, and most convincing, evidence came from the study of two human neurological patients, TN and DB. TN had had two successive strokes, causing major neurological damage to his visual cortex, which rendered him “blind” in both eyes. After considerable study, researchers took TN to the hallway, asking him to walk down the hallway without his usual cane. Unbeknownst to TN, researchers had placed several objects in the hall around which avoided them all, even pressing himself against the wall to avoid a trash can. Patient DB, whose occipital cortex had been removed surgically because of a tumor, was also “blind” according to the traditional measures of vision. Researcher used forced-choice tests, in which DB was asked to guess where, between two locations in front of him, an object had been placed. His guesses were significantly more accurate than chance, even though he could not see the objects.”

Taking consideration into these extraordinary situations, it got me thinking about how we might utilize understanding of the above to enhance visual information processing during rehabilitation?

Are we giving more consideration than just having eyes open or eyes closed during activities? Should we be more focused on introducing an open environment with foreground, background, and peripheral visual field training? Especially for our athletes? Could we maximize our vision processing by putting our clients into situations that enhance the use of both their ventral and dorsal streams of visual input to increase their reaction times, up-train their feedforward mechanisms via learning and processing, and make them LESS reliant on the ventral stream?

A couple of recently published articles by DR Grooms seems to lead us down this path. If you aren’t aware of Grooms…search him out. In my opinion, he is doing some cutting edge research regarding visual-motor processing, see how the brain potential changes as environments change, and how the body reacts to different stimuli. In his published study found here, he makes a compelling argument establishing a link “ between dynamic movement mechanics, neurocognition, and visual processing regarding anterior cruciate ligament injury adaptations and injury risk.”

Perhaps utilizing training tools to not just focus on “sexy” exercises on soft balls, and jumping over objects (these have their place in specific areas of rehabilitation), but also incorporate more dorsal stream neurocognitive recognition stimulation via multiple “levels” of vision processing may improve the ability to compensate for external stimuli and/or attenuate the rapid maneuvers that depend on quick visual-motor interaction. His full explanations can be found here . The succinct answer is faster reaction times, possible increased visual processing via the dorsal vs ventral stream, and decreased visual reliance on motor skills in the autonomous phase may improve preparation for incoming perturbations while maintaining neuromuscular integrity.

Examples of the previous statement could range from basic recognition of flashes of different colors in the background while juggling; or more advanced utilizing strobe training glasses while catching a ball. Environments that facilitate more feedforward mechanisms than feedback and adding neurocognitive elements to injury prevention and rehabilitation programs may reduce motor control errors during sport when visual-spatial responsibilities are in high demand.