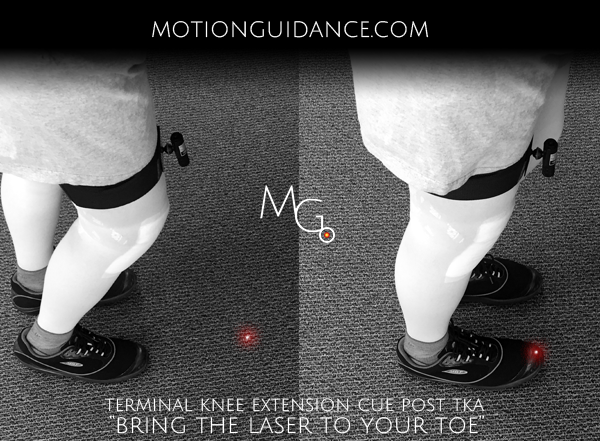 Achieving full knee extension is crucial early on post Total Knee Arthroplasty, and can often be a challenge. Factors may include pain, quadriceps inhibition, and difficulty "figuring out" what it means to engage the quadriceps and straighten the knee, as the surrounding tissues in the knee have undergone some massive carpentry.

Quad setting can be beneficial early on as not only does it start to allow early muscle performance and assist in extension, but it may act as a pumping mechanism to move fluid. It’s a good idea to be performing little squeeze and release contractions all the time post op, as well as getting in light cycling, even if a full revolution isn't likely.

When it comes to success and gaining ROM, I think inflammation control is paramount. An individuals metabolic and inflammatory profile can greatly influence their pain, motion, and overall experience post TKA. Ensuring proper use of anti-inflammatories, ice/elevate use, load management, and compression garments are all a big part of early rehab, and perhaps more important than anything.

The difficulty lies in what may seem as good intentions, pushing for ROM, can backfire. This is totally dependent on how volatile the inflammatory response is for the individual, so no one person can fit a perfect protocol when it comes to the question of how aggressive you should be. I rarely find being aggressive with ROM pays off, especially regarding flexion (ie pushing through pain and gritting teeth to get the goni a respectable digit)- crushing to get the numbers then flopping on ice packs may leave you thinking "at least I tried". But in reality, if we're big time increasing inflammation and pain its likely to inhibit getting back to that number any time soon. It's a difficult balance. Early on, I've found education on activity dose/management, inflammation control, frequent cycling, frequent muscle pumping and setting realistic expectations.

A fantastic progression to maximize early extension and quad function, as well as transfer that to gait, is to start adding visual feedback to OCKE and CKCE focused on extension.

Often the patient is unable to SLR. And if they can, it is accompanied with a heavy dose of quad lag.

Start with something as simple as quad sets, and with the Motion Guidance laser set just above their foot, use a simple verbal cue such as "get the laser to your foot, and work on moving it as far down the foot as you are able". This allows the patient to figure things out on their end, without internalizing their body mechanics, they can just start to see what works best to achieve the task. As you try this exercise, you’ll also observe that it is virtually impossible to cheat or substitute. If the knee doesn’t extend, the laser won’t move onto the foot. Classic cheats such as hip extension, forward trunk lean, and the like, will not move the laser, no matter how hard the patient tries.

This video demonstrates quad setting with external cues to maximize extension and add real-time feedback and objective ROM ability. Its easy to understand what the goal is.

Once the patient can quad set, the next challenge is the SLR. Its really easy to loose extension during SLR for early on TKA patients, and its really hard to describe what quad lag is. With the laser visual, you can use a cue like "keep the laser on the toe, and elevate your entire leg". If the laser moves up on the foot, they're loosing it.

If they can't get it, go back to a short-arc-quad exercise, with the same visual feedback set up: start 3 sec holds laser to toe and release, then 5, 10, 15 etc. 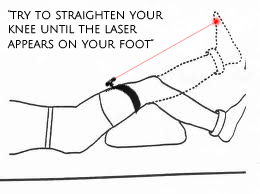 You can apply the same visual external cue to standing TKE (and have the patient practice LOTS of these) as well as gait, bringing ability into function is difficult to do, but walking is habitiual and a great time for constant practice of TKE ability and normalizing mechanics.

These cues are super simple, but really effective and yeild instant learning without unnecessary cognitive process and internalizing movement. Simply move the dot in the direction directed, and see what happens.

To learn more about Motion Guidance, click the link below: